MAINESQUEEZE is a brilliant mix of Rhythm & Roots, Texas swing, folk, R&B and country with 3-part harmonies, hot guitar and pedal steel. From sultry ballads to flat-out fun, they squeeze it all in. Highly revered for their versatility and originality, the band draws on varied musical styles. Their shows are both lively and laid-back and fun too! They've performed with many well-known musicians in their local area and nationally since 1985.

"Without a doubt Mainesqueeze is one of the best bands we have hired. We have used them for family picnics and our summer concert series and have never been disappointed. They keep their audience entertained with their variety of music and their home town demeanor."  - Heather Muzeroll-Roy, Director, ECSD, Eliot, ME

Here's a link to one of our shows at the North Hampton, NH Gazebo concerts: MAINESQUEEZE at North Hampton 2018

MAINESQUEEZE (not to be confused with the accordion band, The Maine Squeeze) is a brilliant mix of rhythm & roots,Texas-swing, folk, country and more with 3-part harmonies, hot guitar and pedal steel.

Here's a link to one of our shows at the North Hampton, NH Gazebo the summer of 2018!

Doug’s understated musical stamp and his uncanny ability to track down tunes by the likes of The Delmore Brothers, Ella Mae Morse, Moon Mullican, and Memphis Minnie keeps the band on its quirky axle and sets it apart. From sultry ballads to flat-out fun, they squeeze it all in.

Also an award-winning children’s music songwriter and performer, Sammie Haynes leads on sultry yet spirited vocals with her folk/country and blues influence. Her second children’s CD,“Nature’s ABC’s”,on A Gentle Wind records, was released at the end of 2004. It’s received high acclaim by National Library Association’s Booklist and the School Library Journal. It also received 4 national awards including a Parents’ Choice! When not performing with MAINESQUEEZE, she tours performing children’s music and with her husband, nationally known singer/songwriter, Cormac McCarthy, who claims MAINESQUEEZE is his favorite band. He often invites them to back him up at concerts and festivals.

Doug Bennett recently released a fabulous CD of mostly original material called “Long Time Blues.” He was also the lead singer in the popular seacoast-based group, the Doc Johnson Blues Band. Earlier in his career he made a name for himself with the Fleet Street Shuffle and the well-loved duo, Bennett & Lawson. He keeps MAINESQUEEZE on its quirky axle of swing, blues, and shuffle with remarkable renditions of old standards. And no one can sing like Doug!

Bruce Derr is one of New England’s most sought-after pedal steel and session players. His playing is creative and impeccable. Bruce can also be seen playing guitar or lap steel with Rounder Recording Artist, Slaid Cleaves as well as with Lex & Joe, Joyce Andersen and others. He was a member of the NY-based bluegrass band, The Dixie Doughboys before moving toNew England.

Berklee Music School grad, Jon Booth, equally comfortable and competent playing bass, or sweet, clean guitar, also sings lead and harmony in many of the band’s tunes. In the 80’s Jon was lead guitarist in the popular Terri Bright and The Motives band and in the duo Booth & Whyte.

Robbie Kneeland is one of the Seacoast's best drummers who drives the band as smooth and steady as a Mercedes-Benz. We're proud and pleased he likes drumming with us! You might see him drumming with other great seacoast area bands as well like High Range and The Rushmores.

Kent is our honorary “squeeze”. When he’s not playing other musicians in the New England area, he loves sitting in with MAINESQUEEZE and we’re always thrilled to have such a fine musician and good friend join us. Our songs really sizzle when Kent's along.

THE BOOK AND BAR - Portsmouth, NH 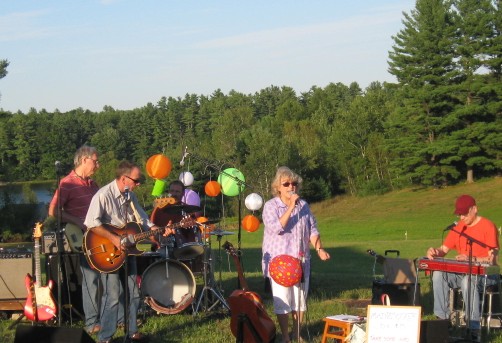 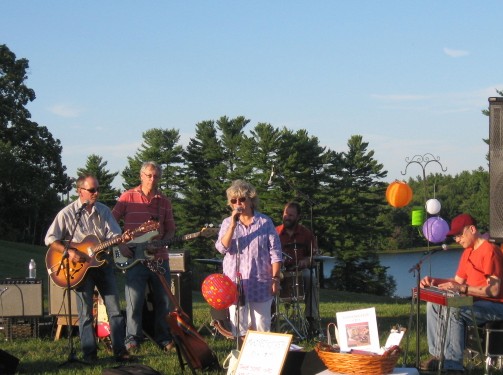 Lots of dancing going on! MAINESQUEEZE at the Hamilton House, South Berwick, ME

Long Way Home had been a long time coming but worth the wait for fans of MAINESQUEEZE. Talk about recording had been going on for years but the project is now complete.

According to band members, they were looking to keep a live feel to the recording by singing duets and harmonies together instead of recording them on separate tracks. Some of the instrument tracks were also recorded in this way.

The songs cover everything from old 30’s tunes such as, “I’ll Never Be Free” (Tennessee Ernie Ford and Kay Star) and “Blues You Never Lose” (the Delmore Brothers) to Texas-swing tunes, “San Antonio Rose” (Bob Wills) and “Texas Swing/I Don’t Want to Live in Texas” (the only original by band member, Sammie Haynes). There are nifty renditions of the once pop tunes “Down in the Boondocks” (J. South) and “Sea of Heartbreak” (P. Hampton/H.David). Other songs include: “What's the Matter with the Mill” (Memphis Minnie McCoy), “Tryin' to Get to You” (Singleton, McCoy), “Crawdad” (Big Bill Broonzy), “Way Over Yonder in the Minor Key” (Woody Guthrie & Billy Bragg), “Across the Great Divide” (Kate Wolf), “If I Needed You” (Townes Van Zandt) and title cut, “Long Way Home” (Tom Waits).

Email us  or click here if you'd like to get a copy for your collection of very cool music: 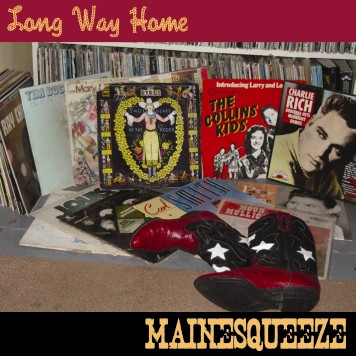